On September 26, 2019, Tzu Chi Foundation Canada collaborated with the Department of Immigration, 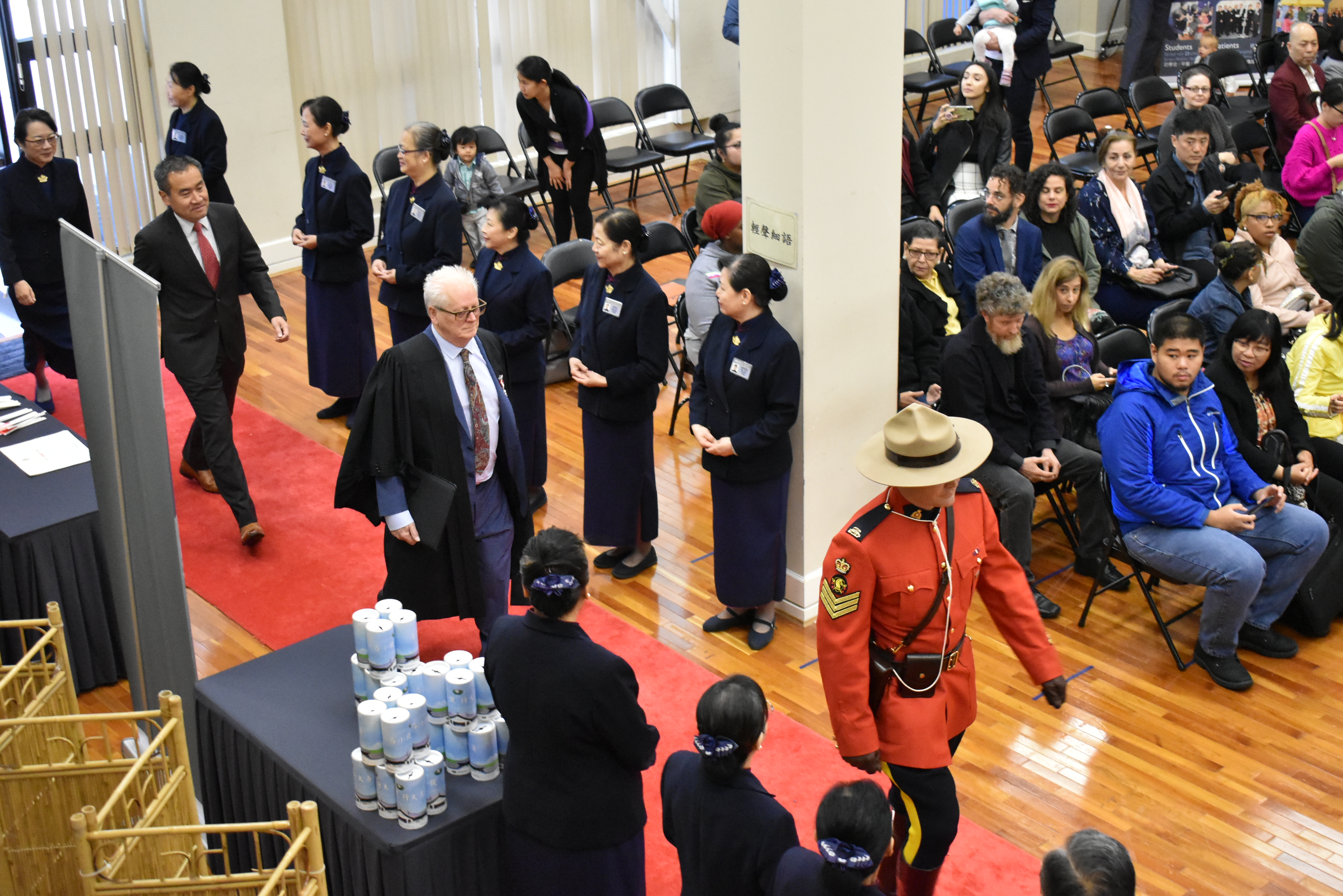 Refugees and Citizenship Canada (CIC) to host the 4th Citizenship Ceremony. For a brief two-hour on a Thursday morning, 39 new citizen candidates from 25 countries became Canadian citizens at the Hall of Tzu Chi Canada .

At 9:30 am, new citizen candidates accompanied by their families arrived at Tzu Chi Foundation Canada with joy, boundless optimism and hope. They were guided by Tzu Chi volunteers to enter into the Jing Si Hall which was transformed into a solemn ceremonial ground.

Marie Wu, the MC from Tzu Chi Canada, introduced Tzu Chi as an organization, including our community services in Canada. She emphasized the common value of our volunteers which is to serve with compassion despite race or religion belief. Then, the beautiful Sign Language team delivered the spirit of Tzu Chi with their music performance “Give Love”. It was also a message for the new citizens in hopes that they can help others in need.

The Clerk from CIC, Valene Revane, opened the ceremony and the proceedings. A Mountie in red serge led the way to enter the ceremony hall, followed by the platform party. The platform party consisted of Dr. Ross Paul, recipient of Order of the Canada and the Presiding Judge of today’s Ceremony, as well as MLA Michael Lee and Dr. Laina Ho, the President of Tzu Chi International College of Traditional Chinese Medicine (TCICTCM). 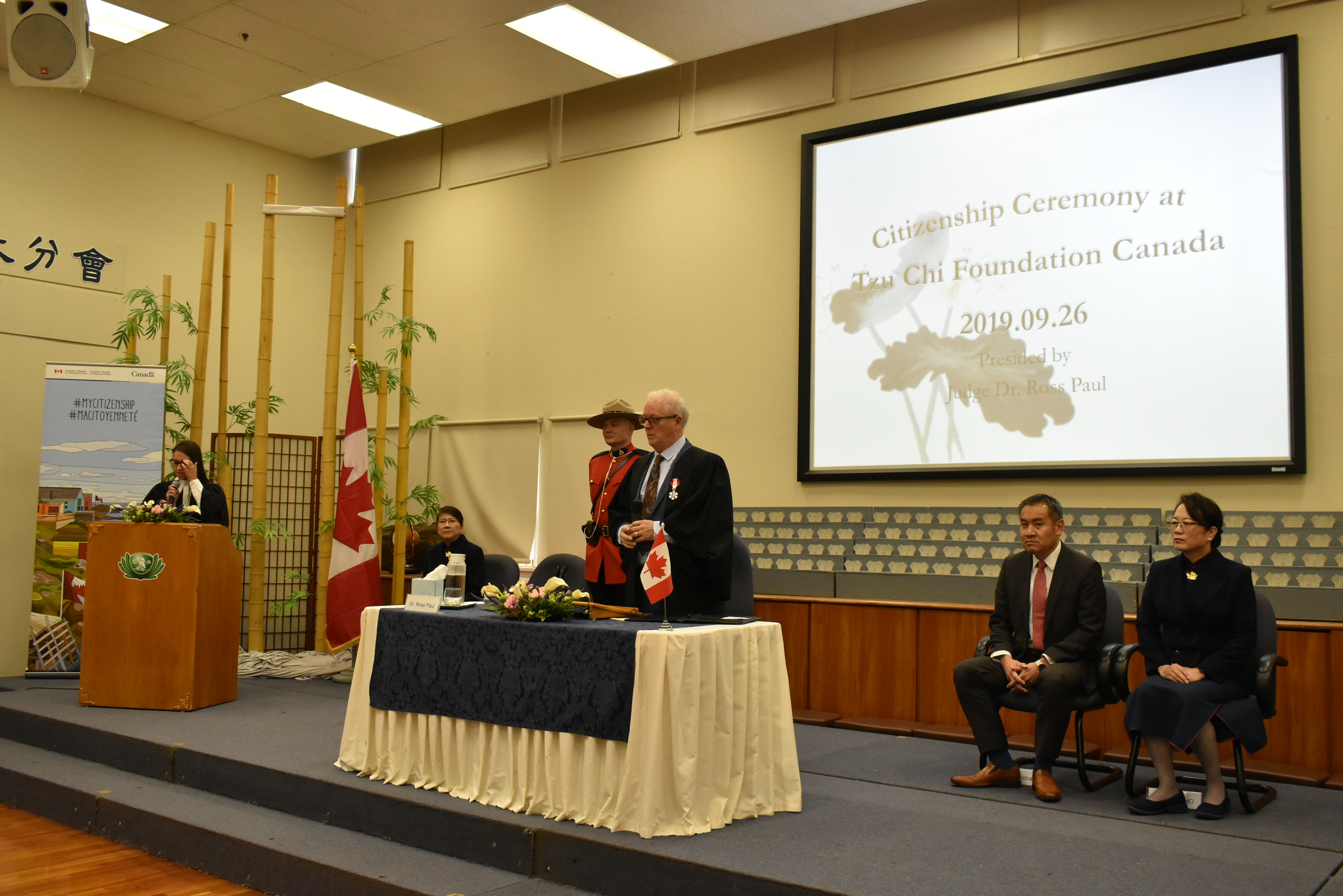 Canada’s newest were congratulated by Dr. Paul. They were also implored to vote responsibly in the coming election. Dr. Paul shared that his role as the Ceremony judge is voluntary and hoped that the new citizens can do the same in their communities.

Then, guest speakers were invited to the stage. MLA Michael Lee’s parents were first-generation immigrants from Hong Kong. In Mr. Lee’s speech, he said that “we should welcome the new immigrants from all around the world in the same way that the Indigenous welcomed us. We have to collaboratively build a harmonious society and maintain a positive environment for our next generations, just as my parents did for me”.   Dr. Ho’s speech followed, which she wished everyone be contributive in building a stronger nation.

The Citizenship Ceremony ended at a high note with everyone singing the National Anthem “Oh, Canada” and celebrating. It marked the start of a new beginning for a lot of new citizens and their families.

In the interview, Irene Jesso from Kenya expressed her proudness in becoming a Canadian. She worked for humanitarian services in the past and has been studying to be a social worker. She said: “I like Canada because I can meet people of different backgrounds and colours in this country. I don’t feel like an intruder. I am a part of the community. I have been in Canada for over 10 years, ever since 2009. I will continue to work for this country as a Canadian. I hope to work as a social worker and serve new immigrants in the future”.

Jujeet Ingale from India who had worked in Dubai became a Canadian with other members of his family on this same day. He said “I was born in India and my wife is a Filipino. My eldest son was born in Dubai and my younger one was in Philippine. We are honoured to be in Canada and become a part of it. We want to contribute our experience and our multicultural background to Canada. We wish our luckiness could bring Canada blessings and allow Canada to accept more people. Thank you Tzu Chi for welcoming us”.

In the post-ceremony interview, Dr. Paul said “it was an honour to preside the Citizenship Ceremony at Tzu Chi. There were some special elements in this ceremony that were different from the ones I have done in the past. But I felt the same joy, proudness, and this is a great investment for the future of Canada. Thank Tzu Chi Canada, for planning such an amazing ceremony. Everyone was deeply touched by these heartfelt details”. 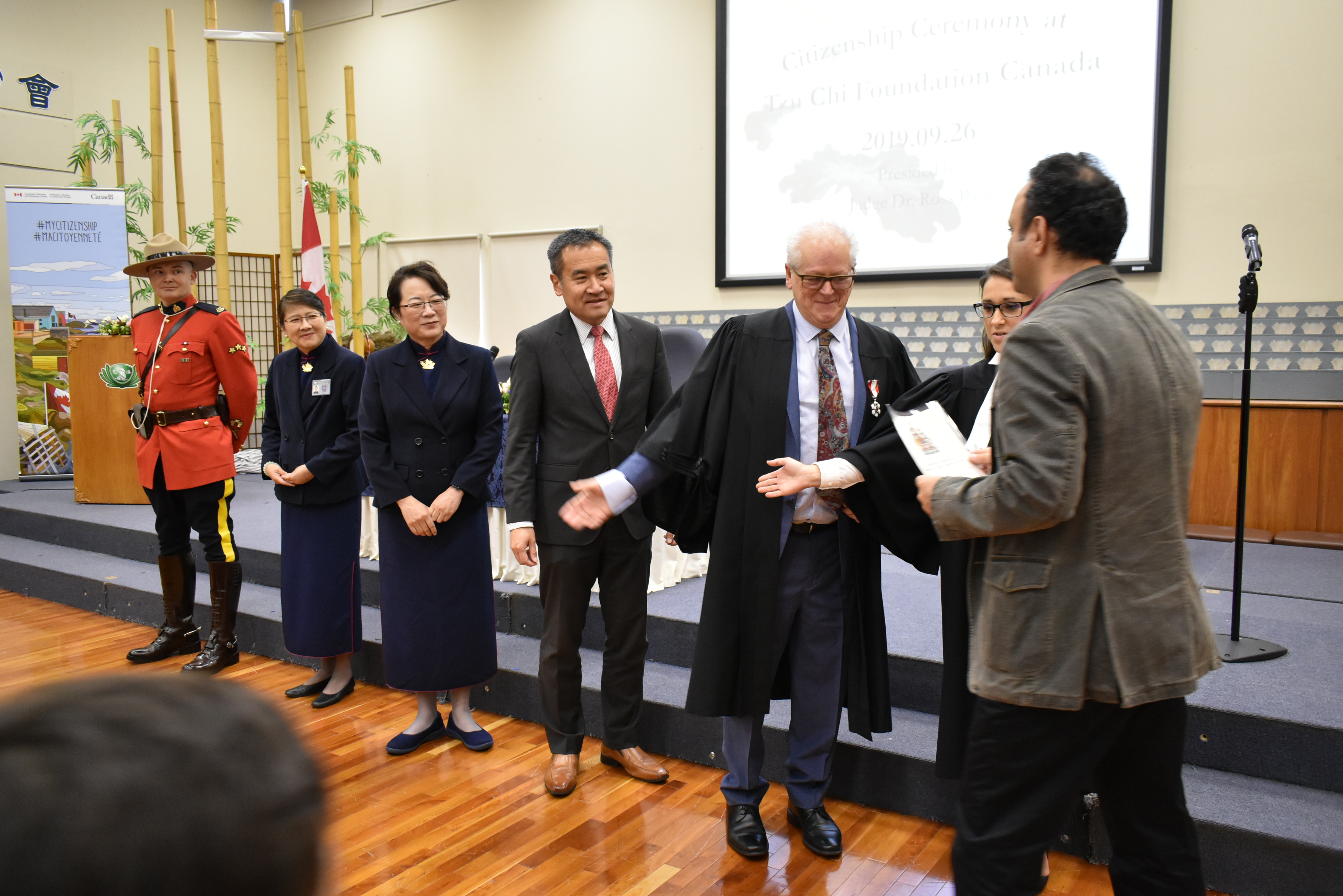 MLA Michael Lee in his interview gave prominence again to the importance of giving. He said “in my speech, I talked about giving back to the community. We are all a part of this community. Anyone who lives here should give, accept, collaborate, and support each other. Multiculturalism is very important for this community. It lets everyone live in a safe environment with religion and culture freedom.

Additionally, Mr. Lee addressed the importance of studying Canadian history and geography. He also pleaded to everyone to sustain the great landscape that the indigenous people have shared with us and help those who are less fortunate. “Tzu Chi,” he said, “is setting up a great example. The works that Tzu Chi volunteers do in the communities and the indiscriminate support you guys provide is the best example for the new citizens”.